Reflection Prompt: As you are taking action, check in with yourself and others as you are able. What is working, right now? Is this action exciting, maybe overwhelming? How does it compare to your expectations?

Social Justice Prompt: Like always, take care to make sure that those most affected by the original issue can be heard within the group and as a representative of your cause, potentially in leadership roles if they choose.

Action Using the Strategies from the Social Change Wheel

Community building: A group of female military veterans created a support group, open to all women who had served in the U.S. military. It soon became clear that some of the women had trauma, emotional ‘wounds’ from their experiences. When these wounds came to the surface, they sometimes created conflict. The leaders wanted to strengthen the community; they also wanted to do this while mindfully and compassionately addressing the needs of these veterans and ensuring continued group participation from members. They were uncertain how to proceed.

A facilitator from outside the group helped to define guidelines for compassionate communication within the group. Compassion was redefined not just as being ‘nice’; rather it involved the members’ responsibilities to each other. Group leaders also reached out to mental health professionals that would provide emergency assistance for the veterans in times of crisis. The redefinition of compassion and enactment of compassion and respect in the creation of such policies helped to create a safe community in practice.

Additionally. the group leaders further developed their communication and conflict management skills at a workshop. Also, the leaders and members both worked to listen and respond with compassion. Together, this led to fewer destructive conflicts and a more supportive environment, where the women truly felt safe.

Protests/demonstrations: The summer 2020 Black Lives Matter protests saw a peak on June 6. In a single day, half a million people showed up in nearly 550 locations across the country, creating mass awareness of police brutality and racial injustice.

As of July 2020, between 15 million and 26 million people in the U.S. participated in demonstrations over the death of George Floyd and others. Black Lives Matter arose in 2013 but gained much more widespread support in 2020, including support from folks without much prior involvement in protests or activism. Many were motivated by videos of police violence against Black people and protestors.

Volunteering and direct service: AmeriCorps volunteer Velma Osborn began volunteering in the 1950’s. As is the case with many people, volunteering has been a major force in her life; in fact, she and her husband were inspired to adopt their first child in 1953 because of a recommendation from one of the Sisters at St. Mary’s Hospital, at which Osborn was a volunteer. She greatly enjoys her involvement in direct service.

At “91 years young” she is still active in her community, volunteering at Ascension Via Christi Hospital and helping with American Red Cross blood drives. She creates supplies for local agencies supporting the ill and disabled, as well as projects like the Wounded Warriors. Osborn enjoys supporting others, and she also recognizes the value of the social connections she makes in her service.

On campus and beyond, there are many opportunities for volunteer work and service within the community.

Resources to Help You Take Action 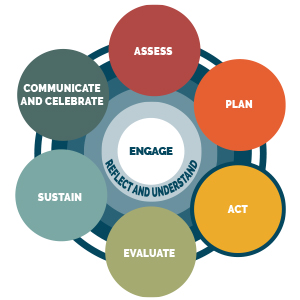